Getting Jellyfin and NextCloud on the same page

Hardware: Dell R720
YunoHost version: Powered by YunoHost 4.0.6.1 (stable).
I have access to my server : SSH, webadmin, direct access
Are you in a special context or did you perform some particular tweaking on your YunoHost instance ? : not really. I have a RAID server.

Description of my issue

This is because these are 2TB large and mountpoint is at /var. Yunohost is on / which is much smaller

In both cases nextcloud doesn’t read the files.

I also notice these in NC logs:

I got the error that "you don’t have permission to run as www-data, this can be solved by giving access to webserver to config. I tried scrwing acround with chown and chgrp a dozen times but to no avail.

I might have borked this NC install, which is fine, and I can delete it and reinstall it but I’ve done this a few times now so I thought I’d ask for help

But what’s your initial issue ? (you just jumped right into technical details without explaining what’s your issue / what you’re trying to achieve …)

I want to use Nextcloud to upload files to /var/Multimedia

I can’t get Nextcloud to read or show those folders

Here is what I did for a similar issue (between Syncthing, Nextcloud, and direct root mounts). Add jellyfin and nextcloud to each other’s group:

Then it depends on how you have mounted /var/Multimedia. The idea is to give the same permissions to both users.

You may need to restart Jellyfin’s, NGINX, and PHP-FPM services.

Then you can add /var/Multimedia to Nextcloud external mounts (as a local directory, in its admin panel).

they’re mounted through /etc/fstab I know!

it seems like I did something when fucking around with permissions and now jellyfin can’t access /var/Multimedia anymore either. so I’ll have a go at the commands you list here.

If I installed Ampache would I do a similar thing as you list here:

it seems like I did something when fucking around with permissions and now jellyfin can’t access /var/Multimedia anymore either. so I’ll have a go at the commands you list here.

Please share your /etc/fstab and the result of ls -la /var/Multimedia (remove any confidential information, obviously), so that we can all be on the same page.

If I installed Ampache would I do a similar thing as you list here:

I would guess so, yes. Do not forget to do the same for ampache user.

ls -la /var/Multimedia (before running the commands above:

I used this to add the storage by the way: https://yunohost.org/#/external_storage

I see that you used the ACLs (+ at the end of the permissions). They seem quite powerful but I am not used to them.
I have also realized that giving Nextcloud access to all Jellyfin files and vice-versa is not really safe, so let’s use an intermediary group multimedia.
Let’s reset everything.

Then add the external mount /var/Multimedia into Nextcloud. Jellyfin should now have write access to the directory too. 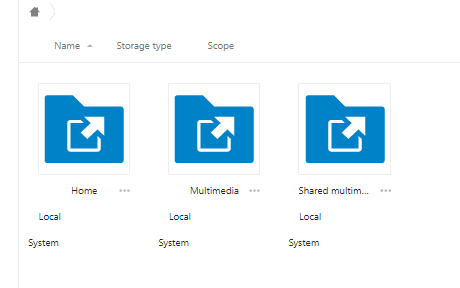 This is what ls -la for /var/Multimedia reports:

I think I can delete

drwxrwxr-x 3 nextcloud multimedia 4096 Sep 6 12:22 NC_USER as I deleted the other leftover NC items

Ah! I’m an idiot, they totally show up in Nextcloud after I take the step of adding them via “External Storage”

re: Jellyfin—I thought I would just delete and reinstall but the install failed (if you’re very curious here are the logs: https://paste.yunohost.org/raw/hatixexudu) but it seems to be a jellyfin issue not a permissions issue, so I’ll chase that down. Thanks for giving me a guide (more or less) on how to do things going forward!

I think I can delete

drwxrwxr-x 3 nextcloud multimedia 4096 Sep 6 12:22 NC_USER as I deleted the other leftover NC items

I think this may have been created as a side effect of the non-handling of symlinks by Nextcloud. If there is no data belonging to you in it, you can delete it yes.

Do not hesitate to report back here when Jellyfin is fixed. Did you have any luck with Ampache, finally?

Ampache works! I’m not really a big fan of the interface, but it’ll work while Jellyfin is still being transitioned to buster

This topic was automatically closed 15 days after the last reply. New replies are no longer allowed.